It’s Boxing Day, whatever that means?! The aussies said that basically it is like the American Black Friday.

I got up earlier than everyone else to FaceTime with my family at 5:30 am my time and 2:30 pm their time. It was great to see them and wish them Merry Christmas. They told me about their plans for dinner with some of my family and thanked me for their presents. I expressed how thankful I was to them for letting me not be there during christmas, since I knew they missed me during this time when families get together. They were very supportive of my decision and even empowered me when I was having doubts. I couldn’t ask for a better family!

After hanging up with them, I saw a Snapchat that my sister had sent me of everyone opening the presents that I got them. It made me feel like I was there, which was a good feeling.

We got on the bus and started our next adventure to Alice Springs, which is literally in the middle of Australia. We’ve come so far from the very top of the Northern Territory to the middle of the country.

The rocks are made of granite and due to weathering and such, are in round shapes. It is pretty amazing when you think about it, since the round shape was created by Mother Nature.

We got some cool pictures in the area.

We then got back on the coach and headed to a roadhouse about 20 minutes down the road. This was an extra special roadhouse, because it is the the UFO capital of Australia. It was basically alien themed and even had a fake alien in a tube in the back, because why not. I’m just not sure whether the owner actually believes in aliens sighting here, or this is just a marketing ploy.

We got back on the road for another 2 hours.

Though the outback is quite remote and we often don’t run into other cars in front of us, there are some different types of traffic jams here than there are in the city. First, since it is wet season we have seen quite a few flooded roads, which we then raise the coach to cross over. The next is wild animals hanging out in the middle of the road. We had to slow down a few times for wild cattle in the road. You know, your everyday traffic jam. 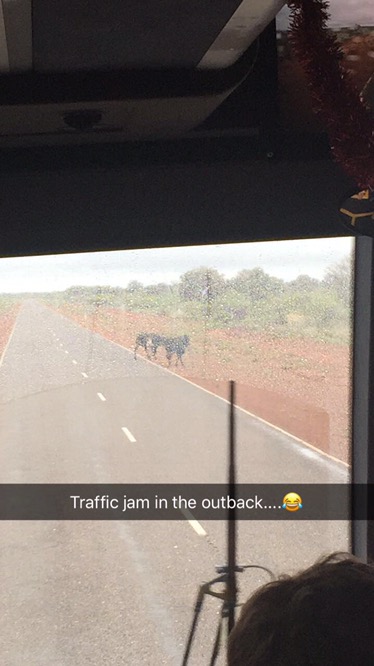 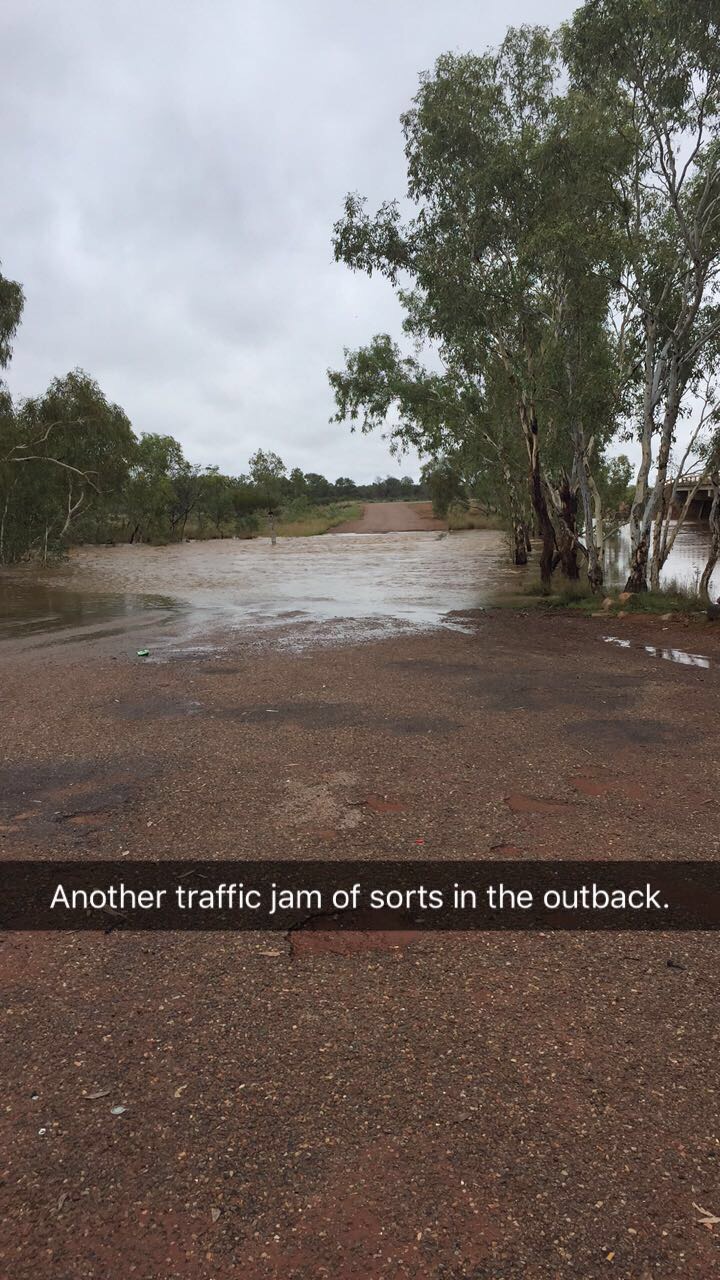 We had about 2 hours into we would make it to Alice Springs, where we would meet about 16 new group mates.

In between making it from lunch and Alice Springs, we stopped at the Tropic of Capricorn, which is the imaginary line that divides the tropical climate from the temperate climate. Basically, we were leaving the wet climate for a drier one. All of us were quite happy about that! 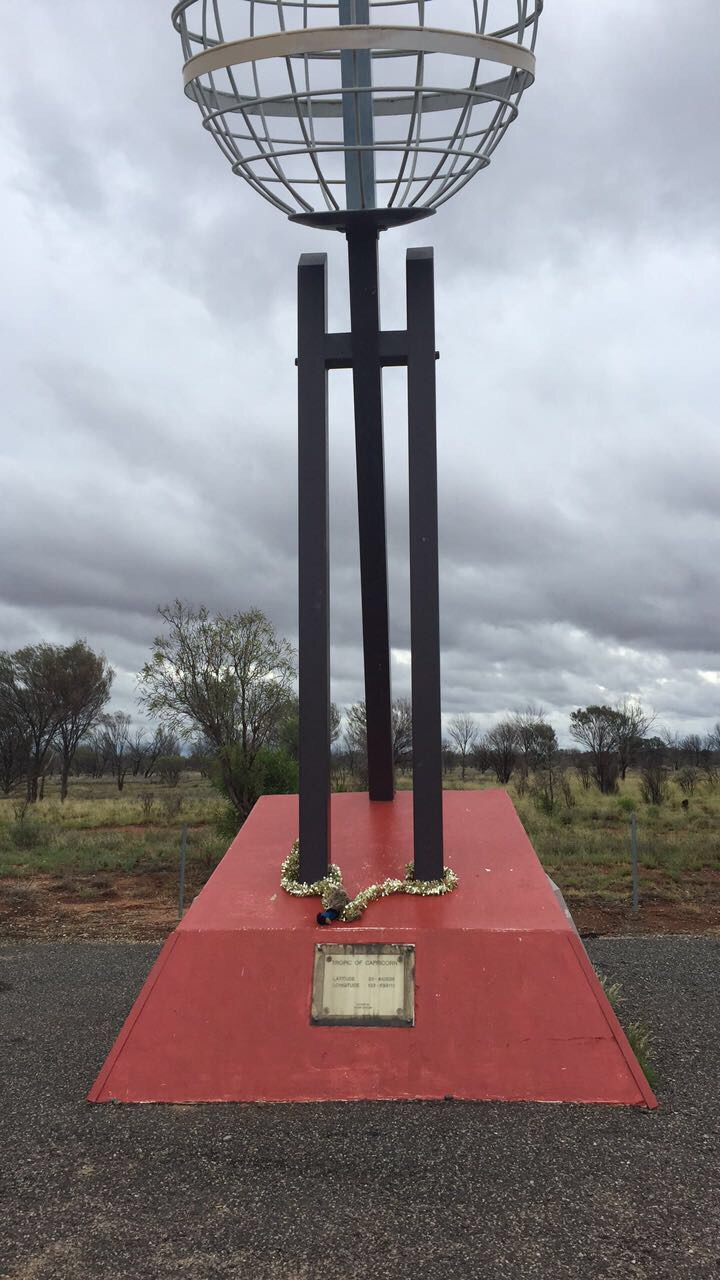 After sitting on a bus for so long, I needed a bit of activity. One of the aussies and I raced across the imaginary line from tropic to desert and didn’t feel a thing, haha.

We continued on our way to Alice Springs. A good friend of mine actually spent her Christmas here for 2 years to be able to be with her family, so I let her know I had made it to town.

We got to Alice Springs, met the new group, did a “ninja” check-in to our new accommodations and hopped back on the coach to head to our first sight here.

About 30 minutes away was Simpsons Gap, which is a gap in the massive ranges out here in Alice Springs. Rain weathered away basically a slice out of a hill. The rocks out here are much more red, since we are literally in the red-center of Australia.

We got out and started heading down to the gap. I met a new guy who is originally from the US, but is on a holiday-work visa in Australia. It is only open to Americans under 30, and gives you the chance to work in Australia, then maybe apply for citizenship. Good to know…right?! (Mom, don’t worry, yet!)

Simpsons Gap area was very windy. There was sand all around that was flying into us as we got closer. There was a pool at the bottom area. We got some cool pictures of the gap. 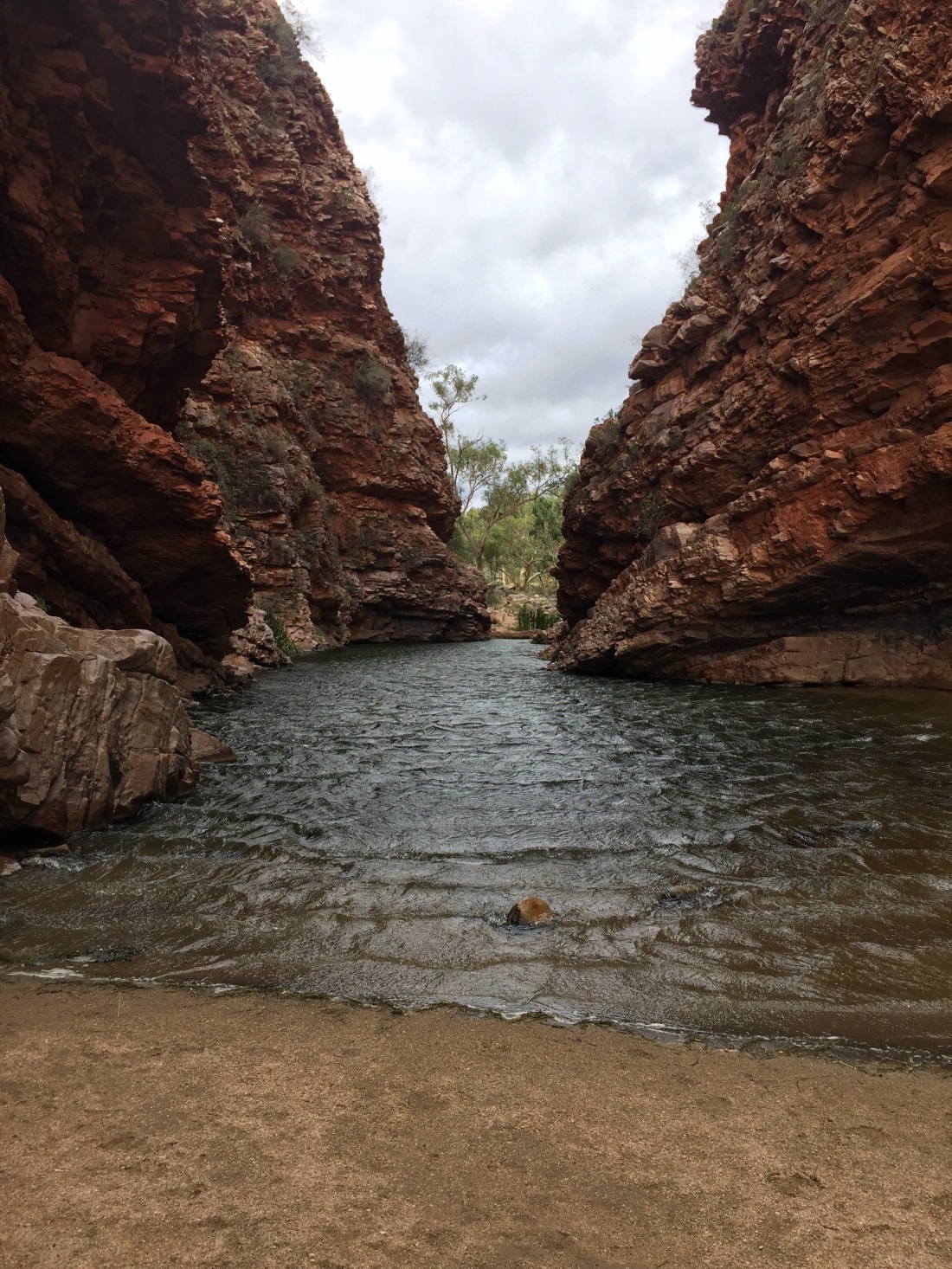 Our next stop was Anzac Hill, which has a memorial to Australian Vetrans. It also is a great overlook over all of Alice Springs.

From there, we headed to the reptile center to learn more about the types of reptiles that inhabit this area. Our speaker was very funny and quite crude, all in good fun. He was clearly excited about reptiles and loved his job.

As many of you may know, Australia is home to the most venomous snakes in the world. However, there are some upsides. First, if you find yourself close to one in Australia, they cannot sense heat, so its best to just stay still. Second, they have very tinh fangs, so you can wear long pants and not get bitten. Third, if you are bitten, you can rightly wrap the infected area with a bandage and expand your time alive by almost double. This is all in comparison to snakes from the rest of the world.

Though people are bitten in Australia by snakes, only 2 people die each year, on average. That is compared to a country like Shri Lanka, which has a similar amount of people, but 20,000 people die of snake bites each year.

I got to hold the well-trained python for a photo opt! 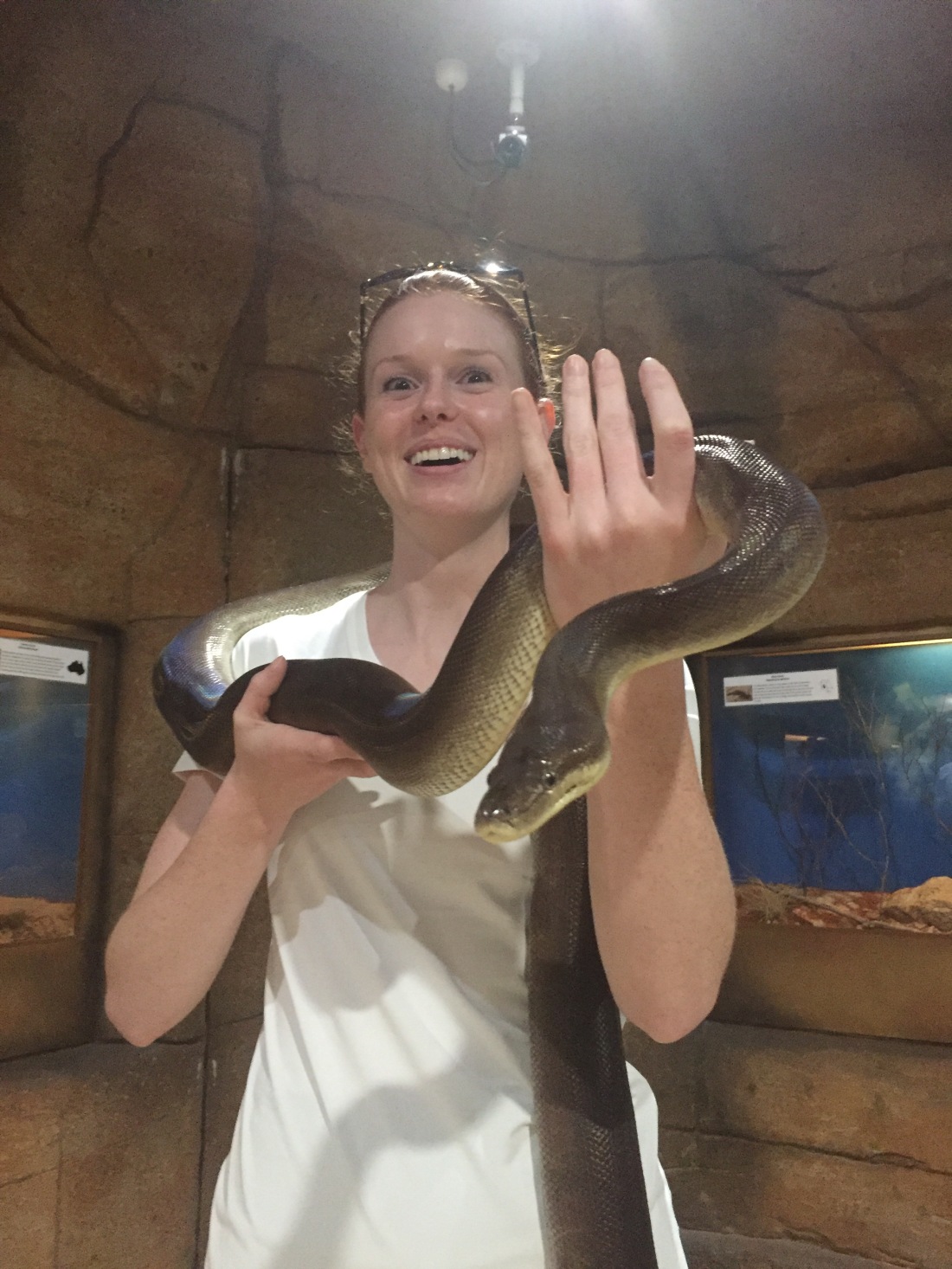 We also learned about lizards in the area. We got to hold two different types of lizards, one was a dragon lizard and one was a blue tongue lizard.

Here is me kissing the dragon lizard.

Here is me being a lizard momma to the blue tongue lizard.

We also got to look around and see some more crocs, which I am slowly realizing are so much more dangerous than I first thought. Crocs in Australia kill in order of country 1. Australians 2. Germans 3. Americans 4. Chinese. This speaker also made fun on Germans hard core, not just because they seem to have a lot of run ins with crocs. There was a small croc behind glass, who if you got to close would snap at you. I just thought about how I had swam with one earlier in the trip…

We got back into the coach and headed back to the hotel to rest before dinner. Plus, there was wifi, which made me happy!

At dinner, we got to know the new group mates better. They all seem great and they bring good energy to the group, who had been with each other for a while on the road. We needed some new blood!

It seems like there is an abnormal amount of rain in the red center right now and Uluru (also known as Ayer rock), our grand finale of sorts, might get cancelled. I’m hoping that in 2 days time the flooding clears and they reopen the park. Fingers crossed!

I got some laundry done, repacked everything and got ready for our swag camping tomorrow night. Goodnight everyone!