I woke up early, got everything together and went to the coach to start the day. Our tour director decked out the coach with green, red and gold garlands, along with beads across the seats that made it look like a sleigh. It was a nice sight to see first thing in the morning on Christmas!

I put my Secret Santa gift in the pile of gifts with everyone else’s. As the coach started to move onto our destination, Christmas music started. Our Christmas Outback adventure was on!

Our tour manager handed out all the secret santa gifts. I got my secret santa person nice Shea butter lotion, given all sun we would be encountering. My secret santa got me a tabloid magazine and some nice chocolate protein bars, perfect for our trip!

We drove for a little before coming upon Mataranka Thermal Pools. There was short path through a palm tree forest to get there. We could see red tailed bats on the way to the pools.

When we got there, we jumped in a loved how warm it was, even though it was pretty warm out already. The water was so clear and flowed over a little brook into a larger stream. We hung out there for a little and decided to go back to the bus early after about 40 minutes in the water. 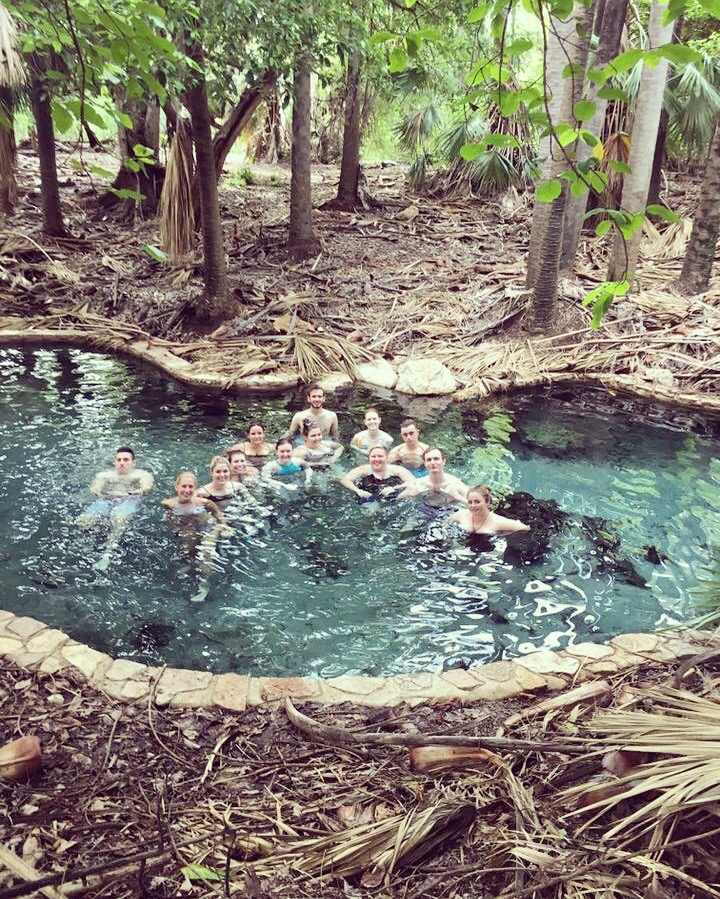 We hopped back on the bus, ready for a long day of travel. We had over 700 km of travel ahead of us for this Christmas Day.

The next stop was at lunch time. We came upon the Daly Waters Pub, which is the oldest pup in the Northern Territory. Airplanes used to land nearby to deliver goods, so this pub was created. It reminded me of Jack’s Browns from Harrisonburg, with all the knick knacks and such. Outside, there was an old helicopter was santa inside and a beer keg Christmas tree. Inside there were bumper stickers everywhere, bras hanging from the ceiling and funny posters everywhere.

We sat down at a table near the pool outside and relaxed. Though the pub wasn’t open, they had a few staff members there for us. They gave us a eskie full of beers. No, ciders or anything. So I thought I would actually try the beer and see if this could be the one that changes my mind. And…. I actually liked it! It was called Summertime, it was an Australian lager with a hint of mango. Literally a Christmas miracle that I enjoyed a beer!

Our tour manager and driver cooked us up a delicious lunch on the Barbie. Patties (hamburgers), snags (sausages) and more. We had a real Aussie barbecue, which was awesome!!

There was even wifi there, so I got to FaceTime my family to say hello and wish them a merry Christmas, even though it was only the 24th there.

Once back on the bus, there was lots of candies to eat, like Cadbury chocolate, pink marshmellows, Tim-tams, and gummies.

During the next drive, I was noticing the Termite mounds were sometimes dressed up in human clothes. Which, from far away made it look like people were on the side of the road. It was funny and interesting.

We watched a couple movies given the amount of driving time. When we finally made it to the accommodations, it was very welcomed to be standing and walking around after such a long drive. And, there was free wifi, amazing!

After relaxing and catching up with the world for a little, we headed to dinner at the restaurant next door. Tennant Creek is a very small town, and there was not many places open on Christmas night especially. We had Chinese food, which was great. One of the girls on the trip is Jewish and she loved it since the unofficial American Jewish tradition is to go to the movies and eat Chinese on Christmas.

This restaurant is also where I learned about Christmas crackers. They are a U.K. and Australian Christmas tradition. Basically, it is a bon on shaped cardboard thing, with two does. The idea is that you partner up with one other person and you each pull yourside until there is a popping noise. The person who gets the middle section wins, technically. Inside there is a small toy, a corny joke and and a Christmas crown. The crown is made of tissue paper and comes is every color. Everyone from Australia talked about their favorite memories wearing a Christmas crown.

I went to my room not too long after and fell asleep quickly, knowing I needed to wake up very early tomorrow. I had let my parents know I would FaceTime them on their Christmas Day at 5:30 am my time, 2:30 pm their time.