We woke up to more rain this morning. Though it is supposed to be the dry season here, it has been rainy and overcast the entire time we have been in Alice Springs. In fact, this is true for most of the desert area of the Outback. Uluru (also known as Ayers Rock), which is our grand finale to this leg of the trip, was flooded out yesterday and the national park was closed. We were starting to get worried we wouldn’t be able to go into the park, which would put a damper on the trip. Our tour guide kept a positive attitude and lined up a plan b, c, and d for us, if the park was closed.

I am keeping positive thoughts, no matter what!

We got up early, packed our overnight bag for camping, ate breakfast and headed out for the day at 7 am. When we were talking about what we were looking forward to most at the beginning of the trip, I said what was going to happen tonight: camping outdoors in swags. It’s a very Aussie thing to do, plus we would be deep in the Outback, so I wanted to see all the stars. Because of the rain, we wouldn’t be able to do a ATV ride around the campsite and might not be able to camp outside…I was a little disappointed.

Our first stop of the day was on the outskirts of Alice Springs to learn about Aboriginal culture. On the way there, we passed the Royal Flying Doctor’s Service, which helps assist people in remote areas. It was established a while ago by a famous Australian who even made it onto the paper money.

When we pulled up to the shelter where we would meet our guide, it started raining even harder. We ran under shelter. One thing I have noticed is that no one but me brought a rain jacket. Our tour manager said that Americans and Canadians seemed to always have the best rain gear. I love my Gore-Tex rain jacket, which has been incredibly useful here. Trying to bring back the rain jacket trend!

Our guide was very knowledgeable about aboriginal people, so I was looking forward to hearing his thoughts. In particular, I was interested in comparing how the US has worked with Native Americans and the Australians and Aboriginal people. From what I could tell in my travels so far, there was a bad unemployment problem. There was also some health issues and quite possibly alcoholism.

Besides learning about the culture, we would also be able to try Bushtucker, which is food from the bush that aboriginal people would eat. There were some normal fruits and vegetables, but also some insects we might be able to try…

The guides started off by talking about how the aboriginal people got here and survived in the bush. They came over from Shri Lanka a while ago and have survived in Australia for over 40,000 years. They slowly moved from the Northern Territory to lower down in the continent. They moved in small tribes and kept their numbers small, allowing for more adaptablility. They had survival rules like sharing their food with everyone or there would be serve punishment and if someone was gravely injured, they would be left behind.

They had some very interesting marriage traditions as well. Apparently, a long time ago there was an inbreeding problem that they wanted to avoid, so they created strict rules about who could marry who. You could only marry people who were 4 families removed. How you would know which lines someone came from was their name. In fact, there were only 8 names in their culture. You would receive your name from your great grandmother or great grandfather. That meant that if you had a sister, you both would have the same name, since you both has the same grandmother.

The girls were married off at around the age of puberty, so around age 12. This was because of the harsh conditions, many of the women did not receive the nourishment to have enough body fat to have a menstrual cycle, so having a baby at a young age was really your best bet for reproducing. The man who the girl would marry, however, was in his early to mid twenties. The boys would need to go through initiation with their fathers and uncles to learn how to provide for his future family, which took time.

The mother was the one who picked out the husband for her daughter, choosing the best to provider. After the daughter married to the husband however, the mother-in-law and son-in-law did not interact. This was because of the closeness in ages. If you married at 11, had your first child at 12 and then married off your 12 year old child when you were 24 to a 24 year old man, then the husband was closer to your age. There would be issues with attraction, so this rule was put into place.

We got the chance to try some bush tea and bush bread, which was delicious. It honestly was just like black tea and scones.

We then got into the learn about the bushtucker. We got to look at vegetables, fruits and seeds that indigenous people found in the bush.

We then got to learn about the whittchity grub, a caterpillar like insect found inside trees. One of our group mates was the one to try it..

We then also got to try kangaroo tail. It was like a really fatty piece of beef or pork.

From there, we went over to see some of the art that aboringal women had created. I even bought a piece that would go nicely in a kitchen or dining room. 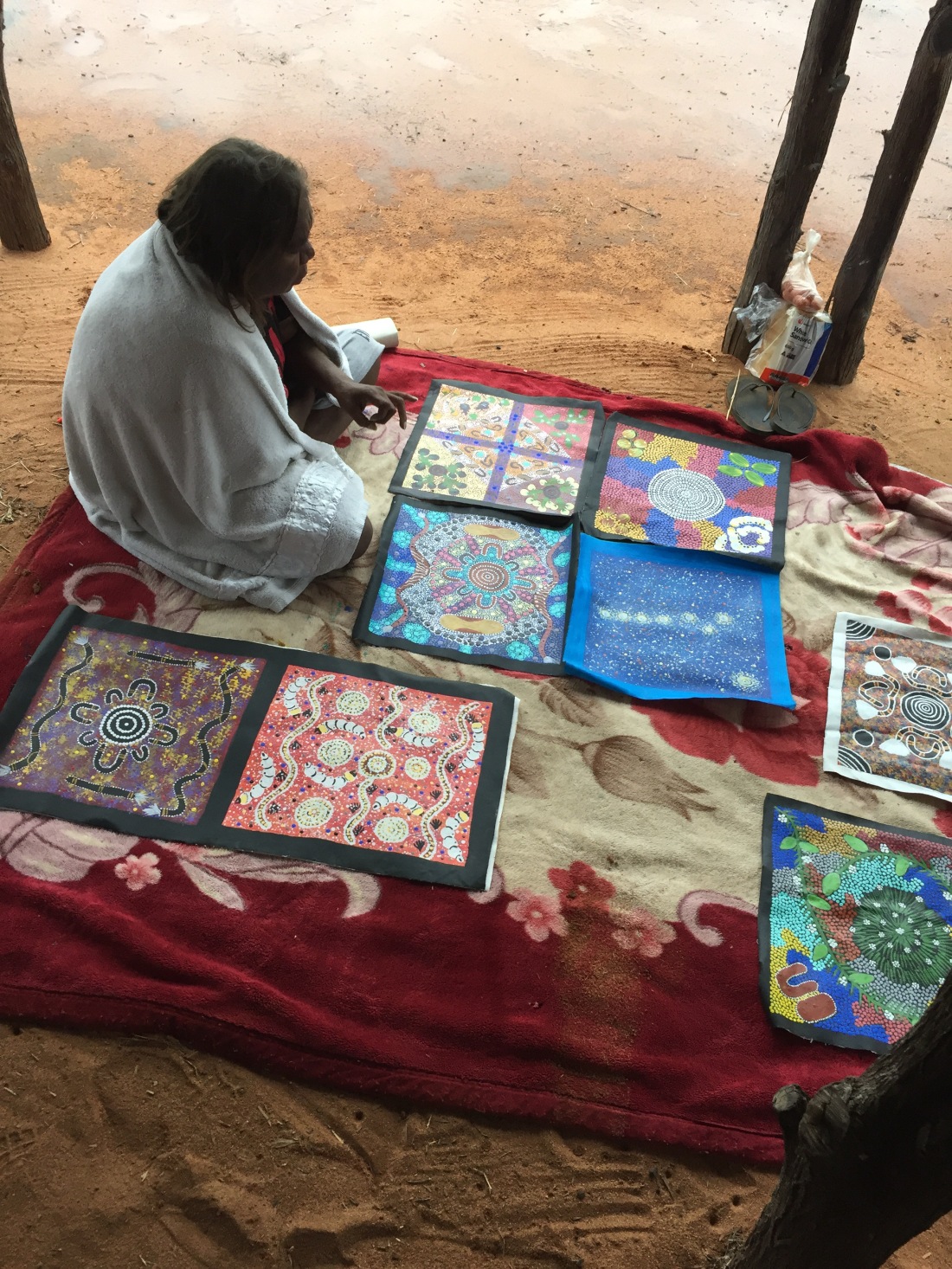 Finally we went to learn about the weapons that they used, including spears, shields and boomerangs. 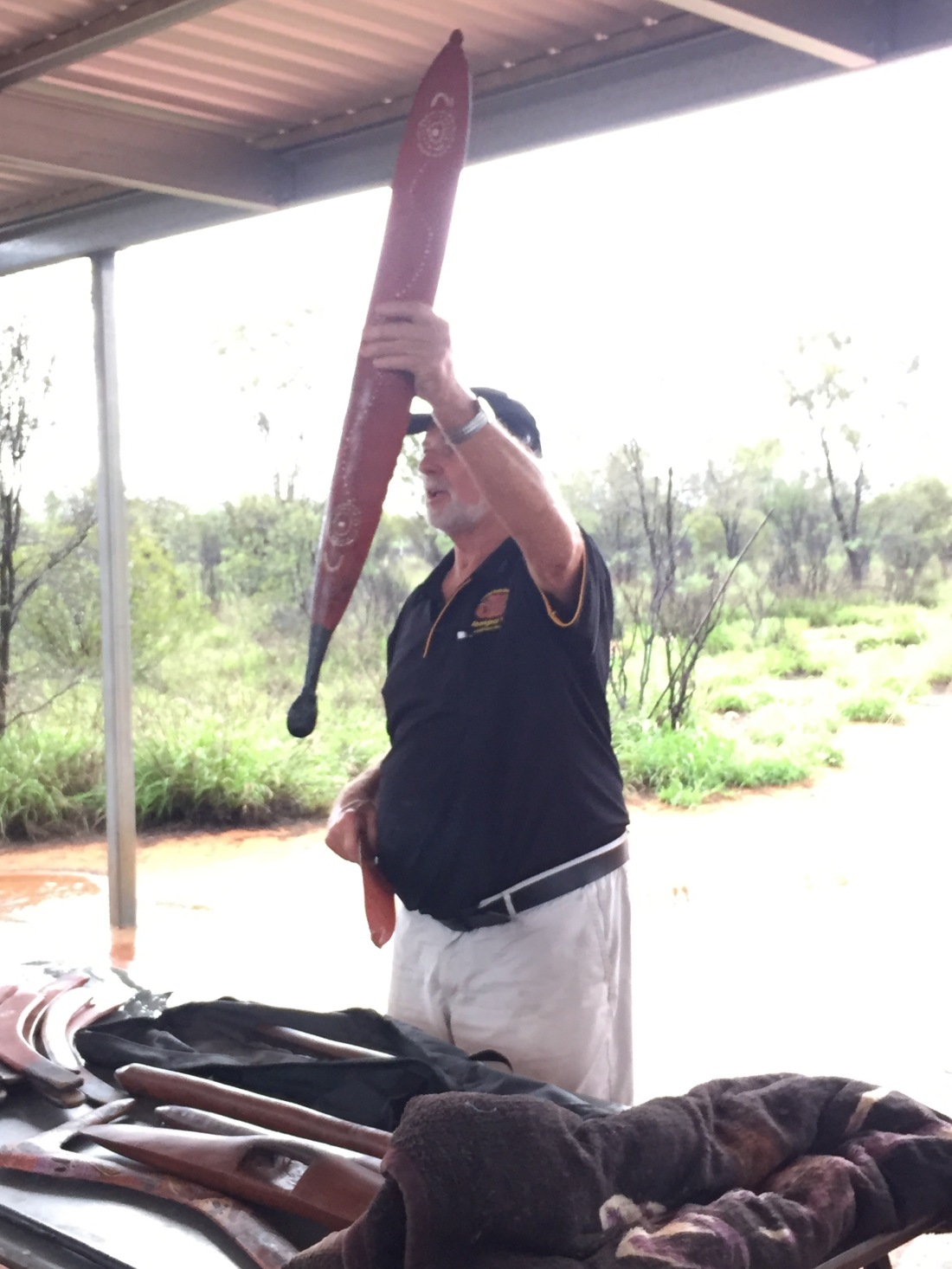 I even got to try my hand at throwing a boomerang, and realized I would not have survived in those days.

We then drove off to our next destination, kings creek station, to camp under the stars.

On the way, we stopped at an emu farm.

When we finally got to Kings Creek Station, there was a noticeable difference in the climate, which was much drier. 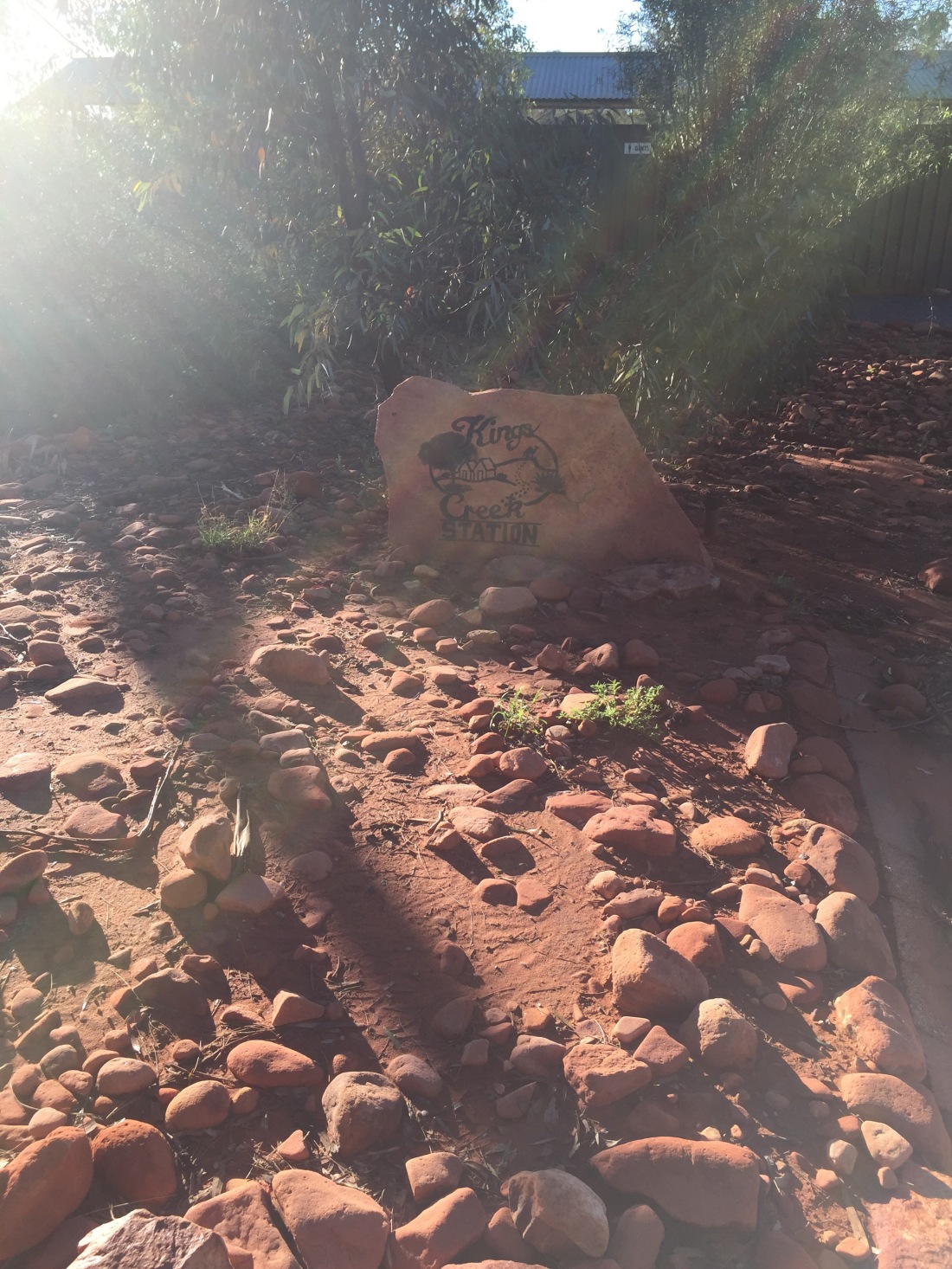 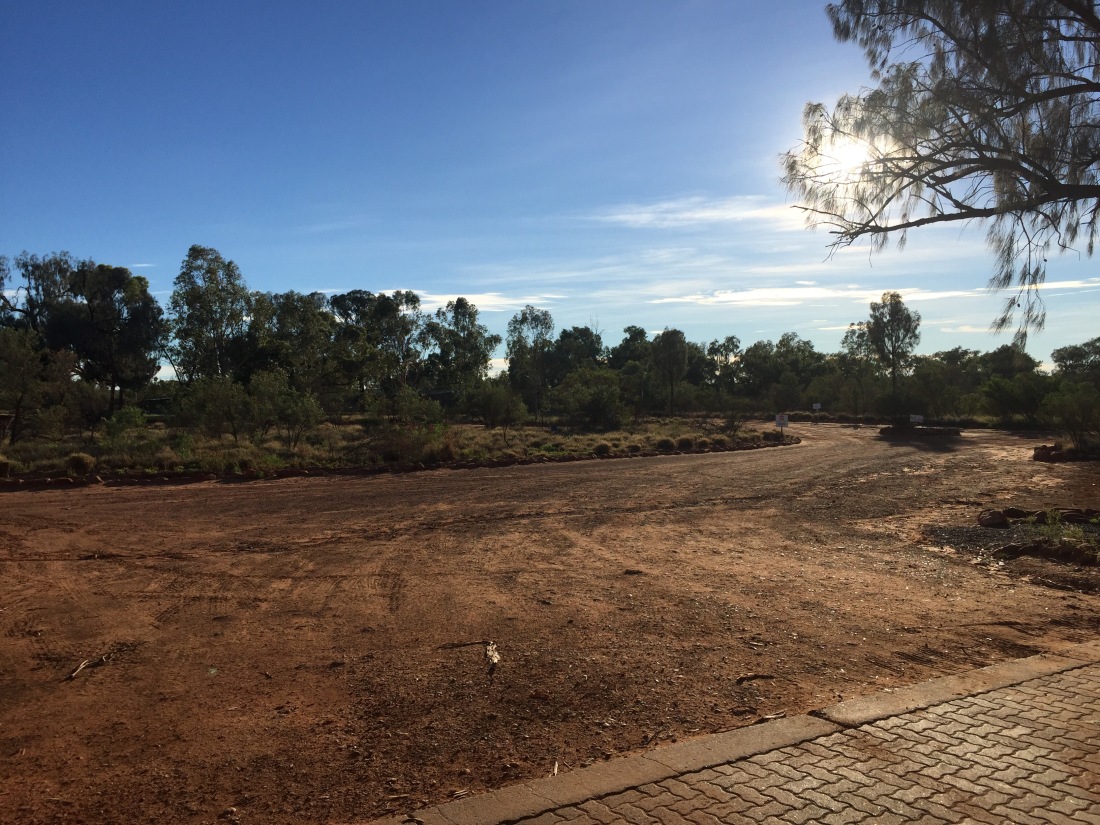 It was an absolute beautiful sight, with red sand everywhere. The sunset was gorgeous at nighttime.

We got to sleep in swags outside, under the beautiful stars, which was awesome. We had been so worried about missing this opportunity. A Swag, for those who don’t know, is a canvas covering for your sleeping bag, so that you don’t have to use a tent. 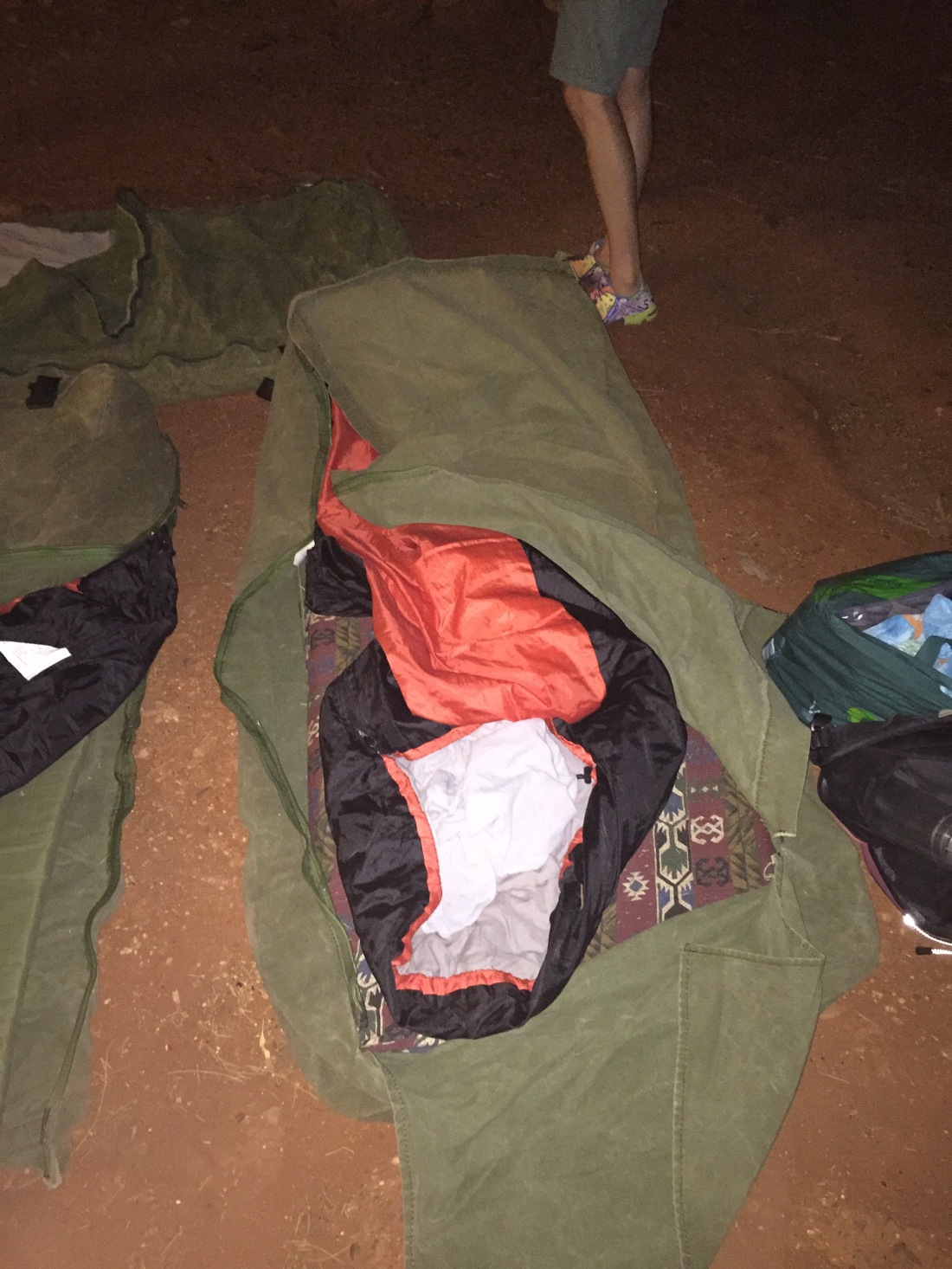 We listened to some guitar, watched all the bugs dance close to the light and just gazed at the stars. Being so far away from a city, I saw the most spectacular sight of stars I had ever seen. We saw the Milky Way and just stared in awe. We even got to see the southern cross, which is on the Australian flag. There is not picture because it is very hard to capture the stars without a proper camera.

We fell asleep outside in hot weather, with nature all around us. And, I’m here to say, on the other side, that I survived!