I woke up the next morning after a night of horrible sleep, feeling achey all over. All I could think was “Great, of all the days to be sick…” It’s never fun to wake up feeling bad, but I of course was especially on edge being sick since I was traveling. The main concern  was that I was technically by myself on this trip. Though I had made friends, it wasn’t the same as having family and friends to care for me. I needed to figure this out on my own. But most importantly, I was on a sailboat, about a 1/2 a days sail from mainland, so if I needed medical help, it wouldn’t be easily accessible. Traveling while sick is just the worst, most uncomfortable thing to feel. However, I needed to make the best of this, because I didn’t want to miss out on the day’s activities.

My fever was even higher this morning than it was last night. So I took a dose of Tylenol at prescription strength. Luckily, this did the trick and I almost immediately felt better. But, I knew I needed to take it easy throughout the day and monitor how my body was feeling.

As we sailed along, we sat on the deck and ate our breakfast after getting dressed in our bathing suits. Our first stop would be the Whitsunday Island (not to be confused with the 74 Whitsunday Islands), which had the beautiful Whitehaven Beach. Once we were close to the island, we hopped on a small motor boat that took us to shore. The instructions from the sailing crew were to enjoy the beach until about lunch time, which gave us about 3 hours. At that time, we would all meet by the beach sign to see some sights around the island. We were given stinger suits to be able to go in the water. It was jelly fish season, so we needed to be able to protect our skin, in case we swam into a few of them.

Finally, we were on the beach with lots of time to hangout & rest. It was immediately apparent why this beach was considered the best in Australia. The white silica sand was pretty and easy to walk on. Because it was so early in the morning, we mostly had the beach to ourselves. I immediately applied a thick layer of sunscreen to my skin. Given how much time we would spend in direct sunlight today, I opted for the 100 SPF. Pale people problems…

We laid out our blankets and relaxed. I put in my headphones and just tried not to think about how bad I had felt earlier this morning. Some rest on this beautiful beach might do some good! 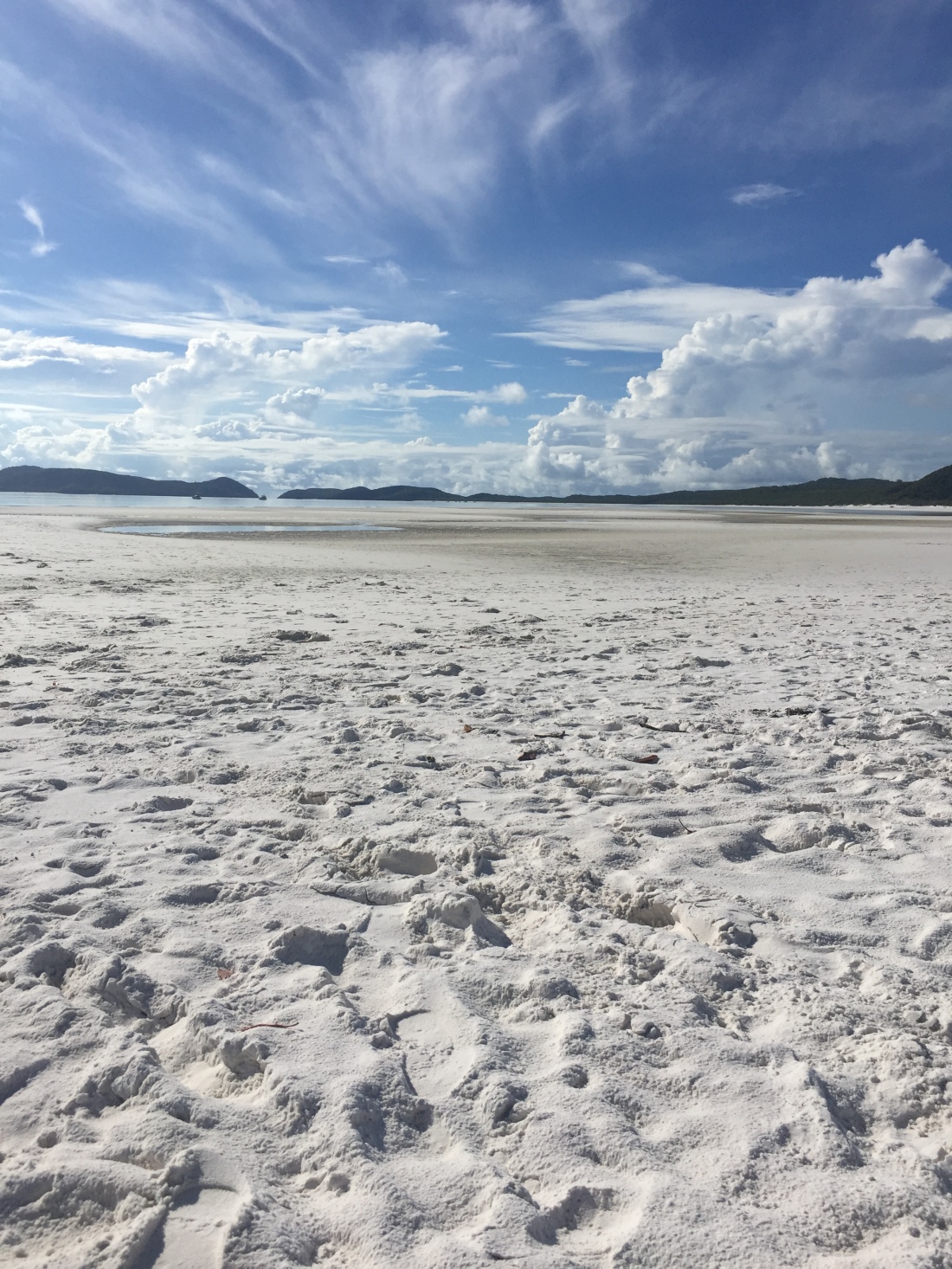 View from my towel.

After relaxing for a while, we decided to head into the water. We got on our stinger suits and ran in. The water was a great warm temperature. We played a few games, did backflips off of each other and made a pyramid in the water, as you can see below. 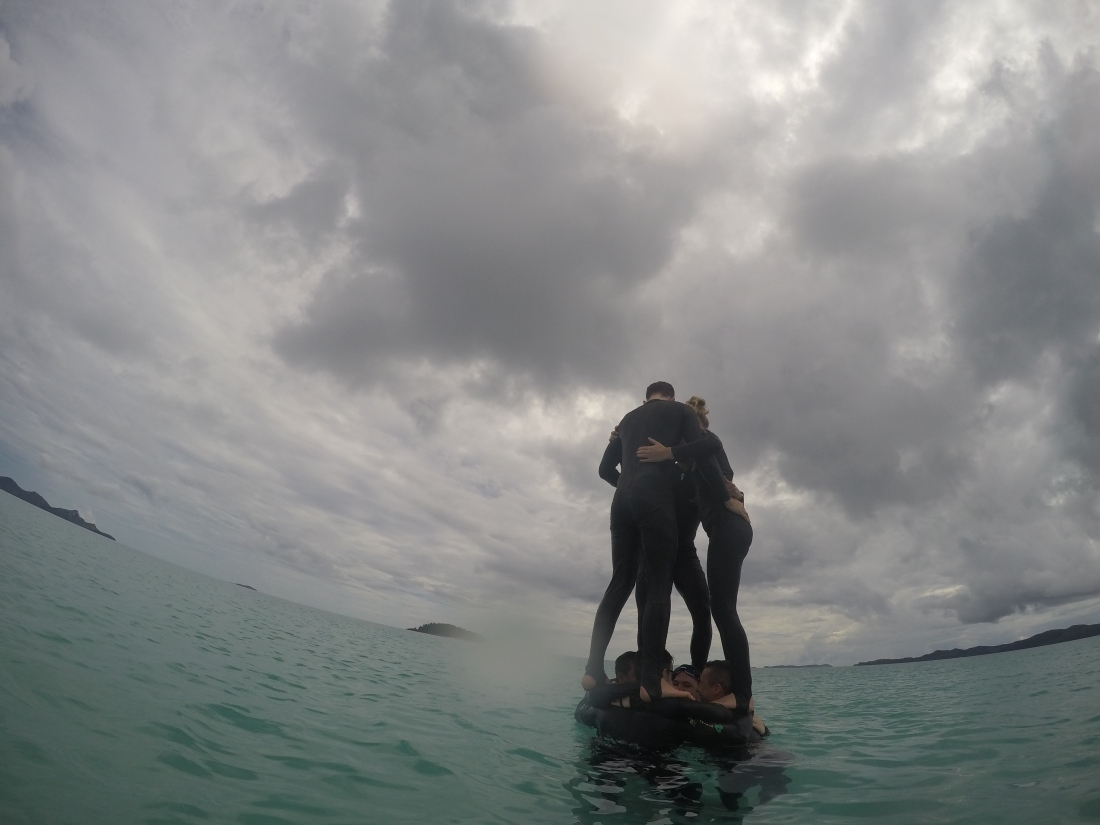 After we got out, some the group played soccer for a little before meeting the sailing staff at the park sign for our next part of the day. It was only noon, and we had a few more activities ahead. Sweet shot captured by one of the group-mates.

We made a grueling climb through the warm canopies of the island to get to a lookout spot with a beautiful overview of the beach. The sand swirls change from day to day, depending on the tides, storms and winds. Seeing the beach from above really emphasized the beautiful colors: the pure white sand, the light blue ocean, and the lush green forest. It was stunning!

We hiked down to the other side of the island to meet the small motor boat which would take us back to the sailboat where we had lunch waiting. As we ate lunch, the captain & crew sailed us through the islands to a location where we would be able to go snorkeling. The Whitsunday Islands are part of the Great Barrier Reef, which spans about 2,300 km of shore of Australia.

Once we got to out location, we put our stinger suits back on and got into the water. I took my GoPro with me to get some footage. I was happy to see that the coral in this area had many more colors than the bleached coral we saw in Cairns. Due to pollution, a warming water temperature and a depleting ozone layer, coral in the Great Barrier Reef is being bleached and dying. There are lot of projects working towards saving the reef, but not much can be done to regrow the damage that has already been completed.

We got to spend a couple hours off the coast of one of the islands snorkeling and exploring the area. We even saw a sea turtle swimming around. It felt pretty magical to be there, in the pleasantly warm water, just exploring the sights below the surface of the ocean.

Once we left the snorkeling area, we sailed around the island to get a little tour. We saw Hamilton Island (famous for being rented out by Taylor Swift), we learned more about the islands and just relaxed with our feet hanging out over the sides of the boat. And, we got little snack as well…

While cruising along, I noticed that my freckles had increased by about 300% over the last 8 hours or so. We had been in almost constant sun exposure, so it made sense. Lots of new little friends! I was also pretty sure I was becoming tanner… As a consistently pale person, that was like a little dream come true. Haha! 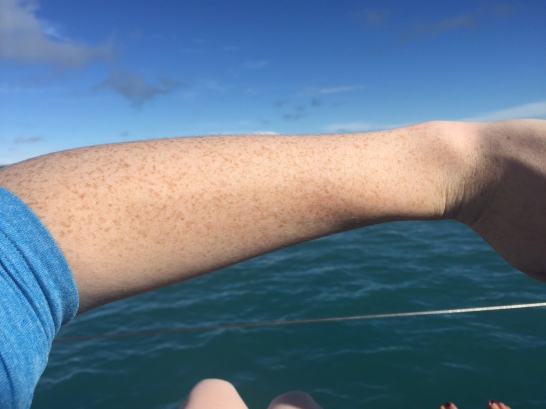 We hadn’t spent too much time learning how to actually sail the sailboat at this point. However, we finally got a turn to help out the crew. We all got to pitch-in and pulled some ropes helping to make some adjustments. However, most of us cheered on 3 of the guys in our group as they hoisted the mast (?). It was incredibly heavy with only one rope to grab & pull down.

Tonight would be our last night onboard, before heading back to shore to meet up with the rest of the group that had stayed on the beachside for the last couple of days.

I slept well that night, hoping that the fever that had been lowered with Tylenol would be officially gone, so I wouldn’t have anymore days of feeling sick. On a trip with close to 50 people, living in tight spaces, this was everyones’ greatest fear. However, I think I have successfully killed this oncoming illness, but only time would tell.

Our sailboat, the broomstick!